So the title explains it all. Lemon the best control monsters only gets outclassed by Bastia. Between slayerbane all, potent sleep, dream all entrance it is completely OP some might say just run counters, but the price of not running counters should just be losing momentum not instantly losing the game (quoted from Sassolino). So I proposes some of these nerfs not all should be implemented :
1.Make the sleep 240 sec
2.Make the sleep purify all monsters first before sleeping. I know this would mean poison won’t be viable but that means nectareon won’t be used anymore and it will only be exclusive to sleep immunes which in my opinion is better to handle
3. Give the thing unmovable (this is a must)
4. Delete it from the game and give all players who have it unlimited gems an a bastia

Threads like this are never civil so lets try to keep it civil. (Don’t say I cry because I lose to it and therefore want it nerf i’m a lemon user too)

Points 2 & 3 would be sufficient enough imo.

I hope they implement no.4

Why don’t you run ogremaster in your endgame?

Good players unlike me will have a pullback monster near lemon

I don’t think your nerf ideas would make her balanced (besides #4, which is what I’d do), but honestly this monster is such a mess that I’d have no idea how to nerf her either.

Personally I think a complete rework is necessary:

Also mythics should have their cost reduction reverted, I mean Gorgodrake costs less on my team than Oakthulhu… are we being serious right now?!

EDIT: Maybe the only way that entrance would be salvageable is by giving it a 33% chance to put to sleep. This way unless you get really unlucky only 1-2 monsters would go to sleep, and it might even backfire if the user gets more unlucky than the opponent. Even then though it would require some testing as some new purify combos might come out of it. 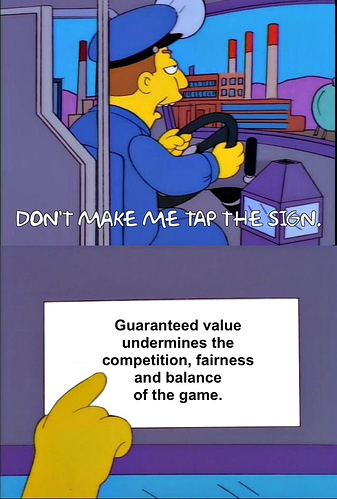 Give potent sleep RAW as well as SOLO. A damn powerful move like this on a mon with plenty else going for her needs more caveats

Slayerbane all on a support mon is nuts

SBA on a support mon is nuts

Doing both suggestions is a possibility too. I agree Lemon is too reliable and easy to build around. She’s not broken, just a bit too much too easily.

50% is a bit generous given everything else she brings to the table: 33% at most and she purifies her own team too… and she’d still be broken.

33% at most and she purifies her own team too… and she’d still be broken.

I know the monster without the passive is basically a stronger Goldtail already, but the passive should be worth building around.

Exactly. She just has too much.

Take away both Potent Sleep and Slayerbane All, then your suggestion is fine. Still pushed, but fine.

Slayerbane all is very bad on her. It’s an incredibly weak move, only made good on Penguinator because it has piercing. Lemon deals half the damage Penguinator does in most cases… so to one-shot enemies she needs 3 of them to have kills and even then she doesn’t one-shot the tanky monsters.

I’m certain they gave her that move simply as a stronger “hit all” move but without making it much stronger at all. Similarly, double dreamhunt is to make it harder for her to control the field than with a single dreamhunt (like we see on Goldtail).

Slayerbane All is the option she has when her win-on-entrance passive has been countered, just to make sure that if she doesn’t win you the game outright she can still threaten to wipe away a decent chuck of the enemy team. And she threatens it well given how insane defensive mythics are.

The fact that you called Slayerbane All on a monster like Lemon “bad” and also manage the tier list is mindblowing to me.