Questions from a new player

Dear friends,
I’m playing Neo Monsters like 11 month now and quite at the same time I installed Evertale. I found NeoMon very nicely structured and easy to learn, but Evertale looked very confusing from the start. It got fantastic artwork, but that’s mainly it. My son played a few weeks, but I decided to play NeoMon and only get the login bonus once in a while. I never opened any pack, just played a bit story mode with the starting characters. After that I changed my phone, but didn’t reinstall Evertale. A few month ago I started collecting the login bonus again to reach 30000 for the well. Today I reached that 30000 and also rank 50.

So I pulled this characters:

I have no idea if they are good or not, but as far as I understand, the SSR is like mythic in NeoMon. SR is like legendary in NeoMon.

I cannot find the monsterdex.

At the summon screen at hero rank 50, friend summon appeared. If this like the friend chest? Are this friend points exclusively used for that screen?

Many people say, don’t play the game, different reasons, but just to collect some monsters it’ll be OK for the start, since I’m patient and like to collect.

Please give me some hints for the start.

Yes, basically all your assumptions are correct. There are many similarities between the two games for some general structural things.

The end-game gameplay is completely different though. Evertale is all about having a large quantity of max ascended characters (like having mythics awakened) then putting them into small teams that synergise and they auto-battle for you. There’s no PvP but there’s a clan system. Neo Monsters is about building synergistic teams and playing very strategically with them, both in manual PvE and PvP. Legendaries are viable alongside mythics, but awakening mythics is harder (Evertale gives ~2.5x the free gems) and mythics are often not very good until awakened plus there’s no clan system.

So in terms of gameplay the two give a very different experience after the initial story modes. Most people are probably drawn to one far more than the other, depending on the person’s interests.

If that third SSR is the Hibiki I think it is, then it’s a pretty good SSR. The other two are fine but not as good as most others. You’ve annoyingly got a mixture of burn and sleep so they won’t work too well together. I’m sure you can have fun with them anyway.

As for guides… the discord is the place to go. That’s where the community hangs out. There are some people who talk strategy on there and can explain what’s good to go for and what’s best avoided. Sounds like you just want some casual fun though, so I’d recommend you do whatever seems fun to you

Thank you for the answers, they help me a lot to understand the basic structure.

Of course my team don’t synergise yet, that’s all the SSR and SR I got, but once I get more in the future, it will be better. It’s enough to have a good start in the game, if I see the odds, I got quite lucky with my 3 SSR already.

I’ll slowly try to figure out the gameplay and events after I finish the story mode.

I found the Dex, thanks for that tip under profile/settings.

I’m glad to have you guys in the forum

I got 4 new SSR and 5 SR today, I feel Ludmilla is kind of nice. I can start building a proper team now.

So this are all monsters I got SR & SSR: 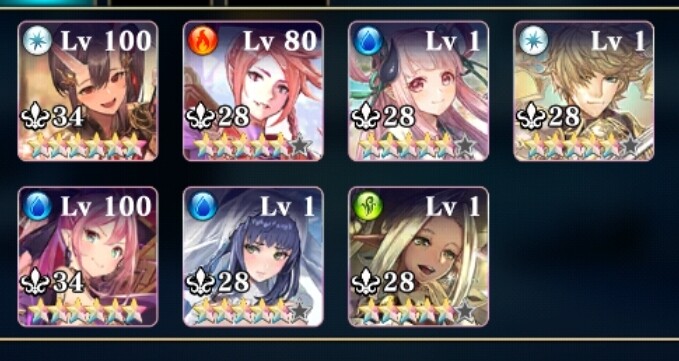 I tried to build a synergy team already. Any advice?

I got a few more SSRs now and one I got double (Rei).

This extra character was not merged with my first. I have the option to fusion it now. It’s there a reason to not fusion it right away? I expected it to directly merge into the existing character like in NeoMon.

Same to the SR and R puzzle pieces, it’s there a reason to not fusion it?

I don’t believe there’s any reason not to merge (ascend). It just costs some resources to do, if I’m not mistaken. Also, when you get excess copies (after it’s fully ascended) you can break them down for resources I think. You could technically do this with all your lower star characters, but I recommend keeping a max ascended copy of everything… especially because they’re needed for fellowships.

Schneewittchen (Snow White) is considered among the best SSRs, congrats! I undervalued her when I first saw the moveset, but it turns out she’s really good. Shiori is kind of like Azuraidos from neo monsters (just saying as a random comment).

Thanks for the help, I’ll just always merge everything then to make the characters and weapons stronger

I believed Ludmilla is very strong of all this characters, but I still don’t really see 100% through the games mechanics yet. It’ll come with time I guess. Hibiki, Snow White and Ludmilla are definitely very nice, so I got a good team already, now it’s slowly starting to become fun to play.

The general rule is fewer clothes = stronger character. I joke, but the more naked characters were released later and power creep is definitely a big thing in Evertale. Also, some of the later characters pushed even more boundaries by being young girls, like Junge Rizette.

I don’t play myself, so can’t recommend any details, but those three you mentioned are probably your best. Ultimately, to do well in things like alliance war it’s predominantly about having a large volume of SSRs and, better still, to have lots of them max ascended.