Here is the movesets and stats for people who feel too lazy to open the app. 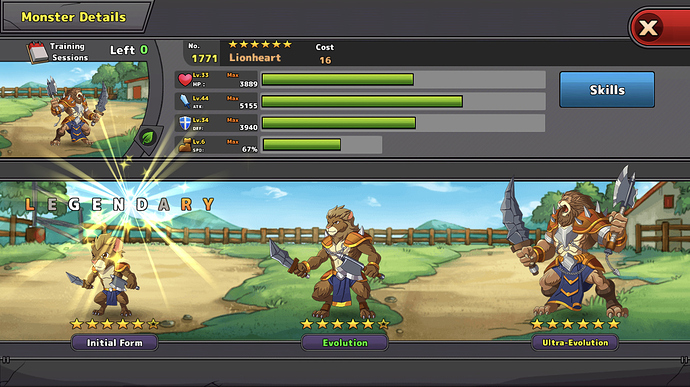 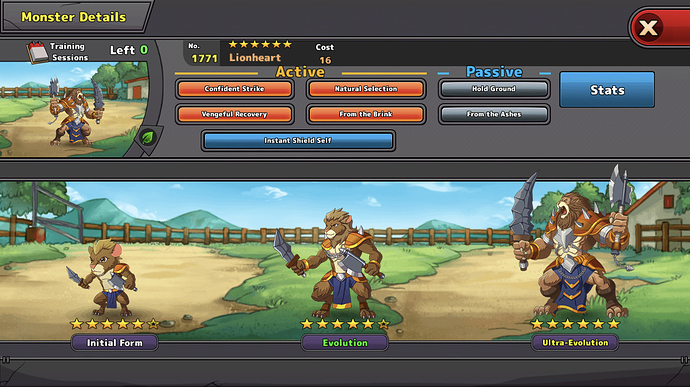 And I just put in my two cents in the Tier list thread…Ah well, I’ll just copy it from there.

This is my first thoughts regarding the newest legend, Lionheart, a monster that I think has a lot of potential. From the look of things, it appears that you’d want it to die off and resurrect into its mythic form in order to make the most out of Natural Selection, arguably one of the most powerful moves yet from the look of things. However, it appears that it doesn’t offer much else asides from that; Confident strike does work wonders but with both its healing moves being situational (requiring a teammate to have died, and being on 1HP), it doesn’t do the monster any favors. However it should be noted that From the Brink gives it a boost to Attack and Defense so there’s that consolation at least. What really holds this monster back in my opinion is the lack of an immunity on its mythic form. I’m not asking for it to have Tholid or anything, but surely it wouldn’t hurt to give it either Stun or Poison Immunity, but only on the mythic form. Truth be told, I could be jumping the gun here since I just got the monster; I’ll do some further testing to see if my first thoughts are spot on, or dreadfully wrong.

Good moveset, not top tier i would say because it has hg which can stop the mytical passive to work and most teams contain only legendaries. But it is earth type which is exactly why i want it for my link earth stuff

Poison could be his downfall, I see. If I get him, Im thinking of using him with bovolcus. Either leave it to die or use the boost to itself.

it need to be strengthened, it is very stiff, and his defense, blood volume is very low

personally i think he is strong but not top tier. more of a A tier monster

while potted and accelerated he will do confident strike at 69tu which is amazing but he is weak to poison.

He has a lot of the same shenanigans as Dusicyon, except that he doesn’t have the same get out of jail free card, which I have a lot of respect for. He always has to wait after healing himself, allowing further opportunity to disrupt him.

Natural selection is a curious bit… first thing to bear in mind is that it doesn’t pierce, making hg monsters very bothersome for him. He does seem like at least a partial answer to AP spam though, since he can bring down any AP excluding stag sloth and the new tree in his first form. Again though, 3 of the most prominent ones have hg and lion has no answer for shield spam, so he ain’t a hard counter by any means.

And of course, poison is his kryptonite. Not only can it deny him both of his passives, but also his shield and full health confident strike. Seriously, will probably need at least 2 purifiers/toxic killers near this guy at all times lol 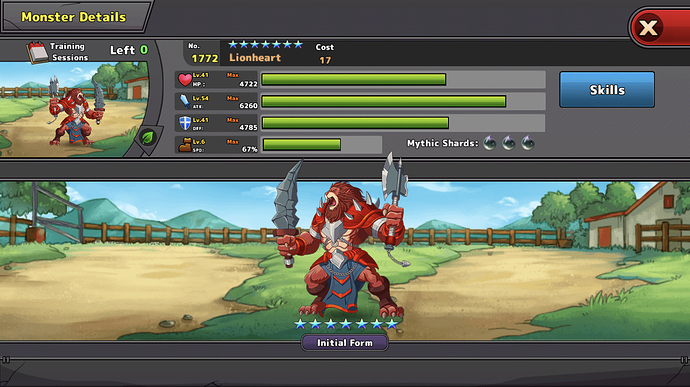 Do pots transfter or no ?

Revives such as this never transfer them

Devs should either change its passive to tholid hg or add piercing effect to its first two moves.

Reasonably good, not a top tier. Could create some shenanigans with revive monsters like aurodragon or atrahasis.

After testing it, I think that Natural selection should do piercing because of the high TU. Also agree that it needs some form of protection from poison.
I always thought it would be cool if monsters had “gradual resistances” like in Evertale eg. Lionheart could have some form of weakened poison immunity: Antibodies. Poisoned status is removed after 100 sec.
Same could apply to sleep, and maybe also a new kind of stun resistance where the monsters takes only 50% of the stun? I think this is much better than releasing a crap load of stun converters and counters. Thoughts?

While your idea of resistances sound interesting, I doubt it’ll happen with the amount of powercreep present. Heck, I hate talking about powercreep since people whinge about it all the time, yet even I can recognise it.

Imo it would be healthier to not promote “all or nothing” immunities so that entire strategies could not be shut down by one monster’s passive. I feel it should have been done a long time ago.

Lol angelion is the definition of having all or nothing immunities that shut down entire strategies.

I agree but in general for me the worst passive is stun counter. I think there should exist max 1 stun counter: Leogeist, because it isn’t overpowered at all on him.

where were you guys when I opened the angelion discussion thread.

I wanted to complain with you but it was pointless. I opened a similar thread a long time ago and got ■■■■ on by the players who call themselves good.