This message is for the devs.

This game is samply call a p2w game . You can play it but if you want to win and get fun you will have to play a lot and a lot when some people just use a credit card and get in 1h what you got in 6 months.

This is boring to play against Mr paypay who have the whole mythic and a full legendary line up with retarded monsters as grovodeus… i summon my pet and im going back in my team summon another pet and my pet will revive me too LOL i just destroyed a guys the last game .

I was still with my 16 monsters and he was with 5 . He didnt touched me until he got only 5 monsters but since he got grovodeus and the others one who shield you every times you join the battle (cant remember his name) it was impossible for me to destroy grovodeus. I have play like mozart during this game that i was 16 against and he was 5 but this bullshit grovodeus should not be able to do that.
Normality should be 1 grovodeus 1 pet and if you revive him he cant summon another pet end of story.

You no pay you no win 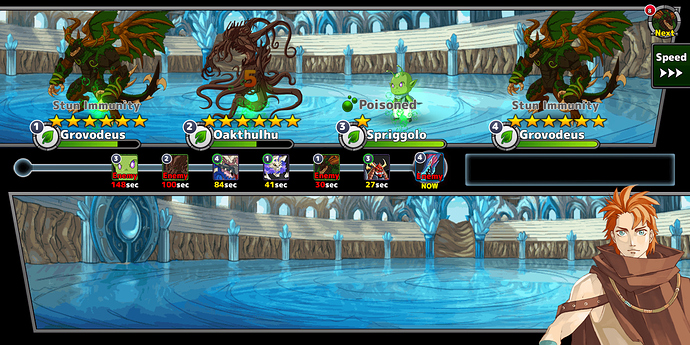 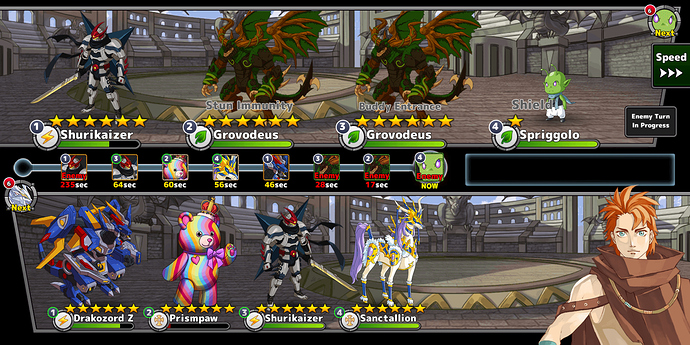 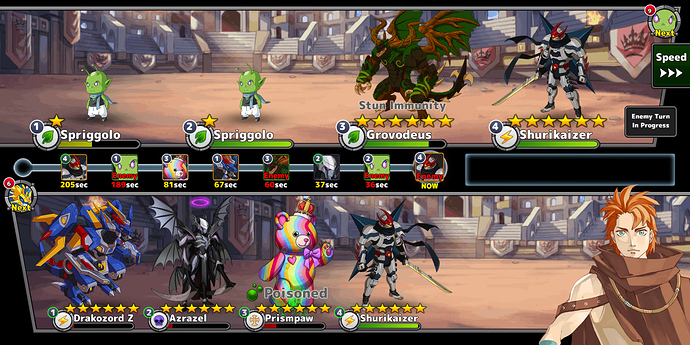 I wouldn’t say this game is P2W. But Grovodeus is hard to manage in PvP.

Make Grovodeus unmovable so he won’t spam Spriggolo’s to revive him.

How I manage it:

When Grovodeus use pullback on himself, I immediately kill another monster so that Grovodeus comes to battle field. Spriggolo can’t use Buddy revive if Grovodeus is on battle field. Then I kill Spriggolo’s. It’s not easy to do every time. so if anybody has a better idea please do share.

We have to hit Spriggolo 2 times (I don’t have any excessive force monsters) by then Grovo will use pullback and there comes a fresh pair. I have to do this again and again… it sucks. May be my team building skill is to blame here.

I personally have had 0 problems with grovo

Gotta adjust your gameplan based on what you see coming next.

Also grovo is in normal egg.

I agree grovo takes to much effort to get rid off, even if he doesnt use the buddy revivel thing. It forcing the enemy to use at least 3 shots (and fast ones) to prevent buddy revival spam, making an opening for your other monsters to get a turn. Its very strong power for 1 monster.

Personally i didnt have any problems as i always focused on him and taking him down asap, but the fact that it forced me to do so is the problem everyone is talking about in the first place.

Grovo is becoming a Real problem in pvp, dont know how you cant simply admit it. It is busted cause both can replicate each other. Sprigolo can summon grovo and grovo can pull back itself producing another sprigolo. This paired with auro and atra opens the door for ridiculus combo that carries the match to an insane long time. Today I had a match of 22 freakin minuts. I personally think it should be restricted somehow.

Totaly agree with you.
This is stupid

It’s obvious that players with large pool of monsters can handle any single monster with moderate effort. But PvP is meant for everybody, unlike UC which mainly focus the p2w players and long term f2p players. If a monster is buffed to a level of being annoying it’s time to reconsider the buff.

I don’t care that some player has no problem dealing with this but personally I think the devs should do something about this.its really annoying.

So it should be balanced around how it feels rather then objectively how strong it is?

Because there’s nothing for me to admit? As I said before I have had no problems with it.

I don’t have a large pool of monsters.

Its simple as this. Like i said it should be 1 grovodeus and 1 spriggolo. Even like this grovodeus would be a good monster not the best tiers but still good.
Its boring to win a game at 95% and because a player have grovodeus lose it because of stupid combinaison like the aurodragon or the one who give shield to everybody joining the battle… all he have to do its revive buddy and hit and run…
Please just fix this and the game will be more fun

So it should be balanced around how it feels rather then objectively how strong it is?

I didn’t understand this. Can you elaborate?

Lol grovo isn’t really that problematic. And just because you lost a 16 v 5 doesn’t mean a monster should be changed, it’s your own fault killing too fast and then leaving yourself vulnerable to basically everything

Yep grovo is real pain…when you kill sprigollo first then grovo pulls back himself to cast another sprig and this combo with ducisyon is soo crazy.