Simple question guys its possible to change purchased legendarys for some tickets bqck? Iff yes how can i do that ?
I doesnt want flocculassuarus even gtail its

When they were nerfed, the devs gave 6 days to turn them in back for half the tickets you spent on them, I dont think that offer will come back around!

Thanks men its a shame

Lol, for me, I got dusci in a pack when he wasnt shop only lol, so i could’ve had 6 tickets!

Me neither i got Dusci before it gets shop only and gtail, and then purchased floccu
Then all got nerfed i didnt exchange floccu because i though he will be buffed on the future cus the nerf he got was really extreme
Whell i was wroung and now he is just a

monster i will never ever use again

I keep him as a collectors item lol, dusci is still feasible!

Duscy is better than it ever has been imo. I was amazed so many people turned it in.

Give goldtail camo entrance will be a lot better in pve

Floccu was way too oppressive, devs did a great job toning him down.

I liked Goldtail a lot better before. Extremely slow and frail, basically unsuitable for PvP, but perfect for PvE. What a shame

At least for me, dusi is better than ever since it’s the perfect stun absorber to run in the frontline.

They should return it as it was before

Duscy is better than it ever has been imo. I was amazed so many people turned it in

These are the same people complaining about rock lock

There was a period where Floccu was in 90% of PvP teams because it was so good and so easy to obtain.

Still useful but not S+ like it used to be. Will get kills if left alive.

People just have incredibly high standards nowadays and aren’t satisfied with anything less than S+. 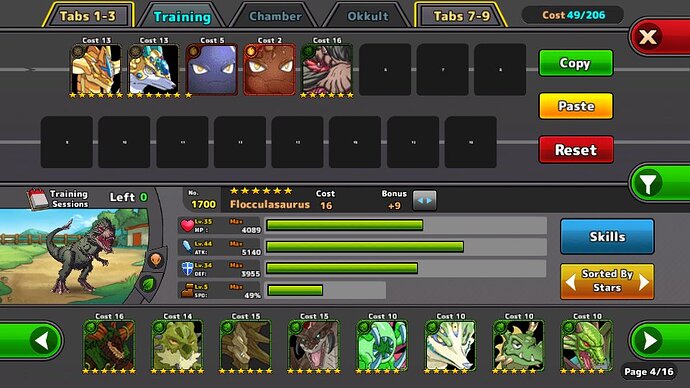 Funnily enough I saw someone run Flocco with an enrage Saber. It was good! Unfortunately they didn’t have the tools and I won because of better legends and myths. But I really respected the team.

They should give flocca tactical retreat again

Maybe even stun immune but keep its attacks single target