Link fire is being nerfed, what about this ?

So lately bastia got nerfed in an unfair way (i don’t own bastia ) where devs wanted indirectly from player to not to use her in frontline , and a new legendary that works well in retribution whith 50 tu focus move , looks like devs want retribution to have glorious days in neo , making the meta unbalanced, while they say they are working or making it balanced i honestly can’t figure out why some monsters and combo are being unfairly nerfed even if they aren’t that OP while other getting more and more strong ,(i would like to ask people here to be honest discussing this , because i already been told by some players using retribution that retribution monsters dont have high speed or its not that strong just because they use it , while a lot of top 50 players in pvp use retribution ) lets talk about the speed of monsters that are used in retribution frontline canishogun 95 % speed black and white titan 90% speed zebrius 81%
Baublebasher 76 % , ,and lately doomhoof whith 79 % jaguardian is the lowest one whith 65% (i would like to say that all the players using retribution are old enough and made all of them +9 ) , before even you get a single turn zebrius canibalise himself (or black or white titan leave then a mojicraft or jawshank come and whith roaring entrance instantly kill themself ) and retri is charged , which make no sense for me because in this game you get punished for what you do ,i dont see any logic in loosing 3-4 monsters from the beggening of the game because your mojicraft used heal all of zebrius canibalized himself , lets not include the ap spam where you can’t get control back and just after killing the monsters that you will loose 3 -4 other monsters again , (all the other moves like poison killer or chrono killer or defang or time strike , nightwach) are a consequences of moves and monsters you use , but retribution being charged because of some moves the oppenet make no sense at all ,but i know its impossible that dev one day will make retribution charged only after you kill oponent’s monster , soo like all the late restrictions for high speed monsters and for more equitable game and because of the high speed of retri i really think that a restriction of 50 tu before zebrius canibalise himself and baublbasher bloodrage or black and white titans leave the field are necessary , we have enough monsters whith gravity as passive but decree of mercy except 1 monsters which isnt enough ,sooo if devs won’t make any restrictions about retribution, i ask them to realise more monsters whith the passive skill : decree of mercy

He’s upset about retribution FLs. Mainly the Titan strat we used years ago which is popular again and also Zib etc.

i ask them to realise more monsters whith the passive skill : decree of mercy

This will need to be managed carefully. The last thing we need are more token lock enablers. Imo if more are released as a counter, it should be for 5* or higher to allow tokens to explode etc

In general I think Titans could be looked at yes. Possibly Zib. I think Bauble is fine because it’s slow enough at 76% to be avoided.

i dont see that many retri fls these days- thanks to jocodragon disabling titans and kbn moji and other counter is kattmander - he destroys jaguardian/basher/angelion/doomhoof,punishes everyone under retri fl except cani …and as for doomhoof that vengeful bash only works when enemy has made a kill not when your ally dies voluntarily …only inst elem retribution works in that scenario - where im sure it wont do much damage on a single element if you’re not running a link team .

No! Slayerbane only hit the monster who has min.1 kill

at the end of the day retribution teams put themselves at a disadvantage by killing thier own monsters. the only retribution strat which i personally thought was disgusting was the Single Stun revenge retribution teams. and that was rightfully nerfed.

if the devs keep nerfing every single strategy then the game would have no variation whatsoever. at least at the moment its only 70% of teams that are identical

agree. The removal of too many playing methods has made the PVP of this game boring

I agree with Eklypz. Retribution FLs have always been part of the meta and never too powerful that they need significant nerfs (except the single stun cannibalising giving turns to stun counters). It’s nice to have multiple options that are strong. Sometimes they become popular and people ask for nerfs, but they always end up get pushed out or unpopular for other reasons. I think it basically proves they’re not overpowered.

The thing is I don’t see this as a problem, we have Glaciaron who can easily win over Black Titan or Zoberius and automatically do two kills on you, or gravity field, a monster as available to everyone as Jokodragon. Easy solutions. I think that instead of asking for a nerf for everything, they should innovate and create strategies that are above all that, An example of this is what I just said. There are strategies much more broken than that of revenge, for example Link Fire, which in my opinion what has put the link on top of everything is the poison. @Dev_VKC Please, I think we still have to continue to review the link fire lock, articlaus does not do the job and aoi only in his awake form. We still need some adjustments, which I am confident will come.

you know link fire is OP when the guy with an Infernicorn avatar is asking for it to be nerfed. XD

Link fire poison monsters need to be nerfed ,gund instant poison gaz should have 50 tu restriction minimum , the super epic whith link dual poison eater should be incrased because people making them +9 , and sweeping at 85 tu is really low , novem moves also should be incrased , magmarinus already got nerfed , inefrni i dont think he deserve any nerf since his moves are high .

So… I think that Link Fire could use a nerf, sure, but it’s a slippery slope to go about it. I’m reading a lot of these responses and they are asking for tons of nerfs across the board, so this would suggest there is not a singular specific area that needs to be nerfed, thus it can’t help the devs at all because they aren’t going to nerf every Legend and SE that’s Fire type. We need to weed through the forest of flames and narrow down what should be changed about Link Fire, casting the net as it stands is asking for the entirety of the Link Fire strategy to get reworked which simply won’t happen.

I thought this thread was about nerfing retribution?

The link fire nerf thread is here: The state of the PvP Meta - Why balance by releasing Counters does not work (at the moment) 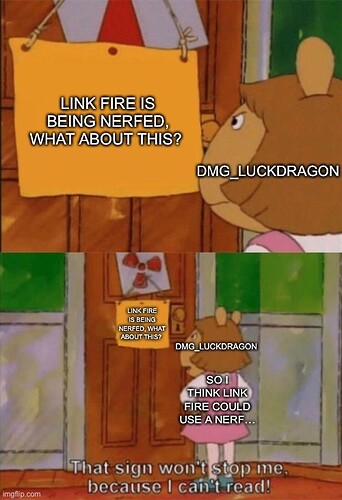 In my defense (and I don’t have one much in this situation lol) the two posts prior to mine were talking about Link Fire, so I was responding to those rather than the OP.

Is this your way of calling me toxic @prise05

If you don’t run stun cresendo you aren’t toxic